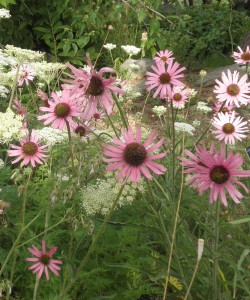 Tennessee purple coneflower, like other coneflowers, has beautiful daisy-shaped flowers, is a butterfly magnet, and thrives in hot, dry, sunny weather.  Unlike most coneflowers, it spent 32 years on the US Fish and Wildlife Service’s Endangered Species list.  Because of conservation efforts, in 2011 it was removed from this list.

Echinacea tennesseensis is endemic to a specific habitat within a 14-mile radius covering three counties in the Nashville, Tennessee area.  This habitat, called a limestone cedar glade, develops in red cedar forests where limestone bedrock close to the surface renders the soil too shallow for woody tree roots.  This creates openings, or glades, in the forest, similar to wide open prairies.  These areas tend to be wetter in the winter and spring, then quite dry throughout the summer.  This coneflower was able to thrive in that area because its tap root could work its way down through fissures in the limestone to access deeply-seated moisture.  However, the rapid expansion and development of the Nashville area and its suburbs in the mid to late twentieth century became an immediate threat to this habitat and the Tennessee coneflower.  After being added to the Endangered Species list in 1979, only the second plant to be added, public and private, and state and federal entities, created and implemented a conservation plan where the existing coneflower populations were supplemented and protected, and the threats were neutralized.

It seems that positive environmental reports are few and far between.  Tennessee coneflower’s story is one that we can enjoy, and now that it no longer needs protection, you can add this beautiful North American native to your own garden.  The purplish-pink ray flowers are erect, whereas some coneflower rays droop, or are reflexed.  But most importantly, the flowers always face east.  Keep this in mind at planting time and make sure those storied blooms are facing you when they open.

Thanks to Sonya Anderson, Denver Botanic Gardens for writing this piece.