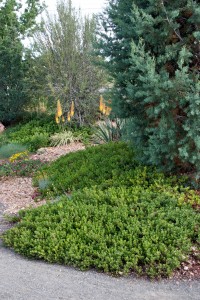 Western winter gardens are made all the more lovely with evergreens, whether the gardens are filled with conifers such as pines, spruce and junipers,  or graced with broad-leaved evergreens such as euonymus and boxwood.  At this time of year, the colors of summer and fall have faded into our memories, and our yearning for spring has already begun.

Choices of broad-leaved evergreens for western gardeners consist primarily of plants native to regions of the world with more moisture, soils higher in organic matter and climates with fewer weather extremes.  It’s only been in recent years that plants from North America are becoming readily available in local nurseries and garden centers. One of the most well-known is kinnickinnick (Arctostaphylos uva-ursi), a broad-leaved evergreen groundcover, used regionally for many years. Amazingly, kinnickinnick is actually native to more than half of the United States (except for the Southeast and central states) and every province in Canada.  An extremely hardy and adaptable species, it’s primarily been the clones from the two coasts (‘Point Reyes’, ‘Woods Compact’ and ‘Massachusetts’). that have been grown commercially all these years, not selections from our western states. 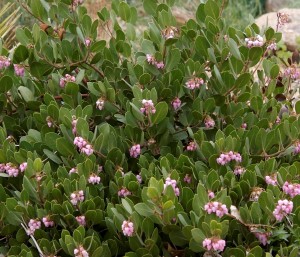 Some local and regional growers are collecting local seed and providing western native selections of kinnickinnick, but only recently have our western native, larger cousins to kinnickinnick – the manzanitas – become more commercially available. The first were introduced by Plant Select® in 2005 (Mock bearberry) and 2006 (Panchito), two selections of natural hybrids from the Uncompaghre Plateau in western Colorado.  The largest and most vigorous of the group, Chieftain, was introduced just last year in 2013. All three are adapted to our dry climate, mineral soils, fluctuating temperatures and high altitude winter sunshine, making them perfect choices for winter color and interest for our region.

The beauty of these slightly larger Arctostaphylos lies beyond the green relief of their leaves in winter gardens, it also comes from the strong, undulating branches and their deep red-mahogany colored bark. And in late winter and early spring – lovely pink, small, heather-like flowers hang in small clusters from the branches, lasting for nearly six weeks, or until temperatures begin to rise in earnest. Mature plants will often produce dark red, tiny apple-like berries in summer.

The primary benefits of the medium-sized arctostaphylos (A. x coloradensis) for wildlife lies in the year-round cover provided by the evergreen leaves. Undulating branches allow for shelter of smaller songbirds and mammals, and leaf litter beneath often is home to many insects, supplying a decent food source during much of the year.

The groundcover kinnickinnick (A. uva-ursi) is a much more prodigious fruit-producer, and the edible “berries” are regularly eaten by bears,  small mammals and fruit-eating songbirds. 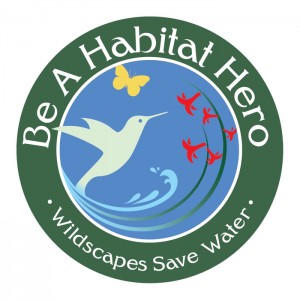 This post is part of the Be a Habitat Hero project, a partnership of Audubon Rockies, High Country Gardens and Plant Select®.