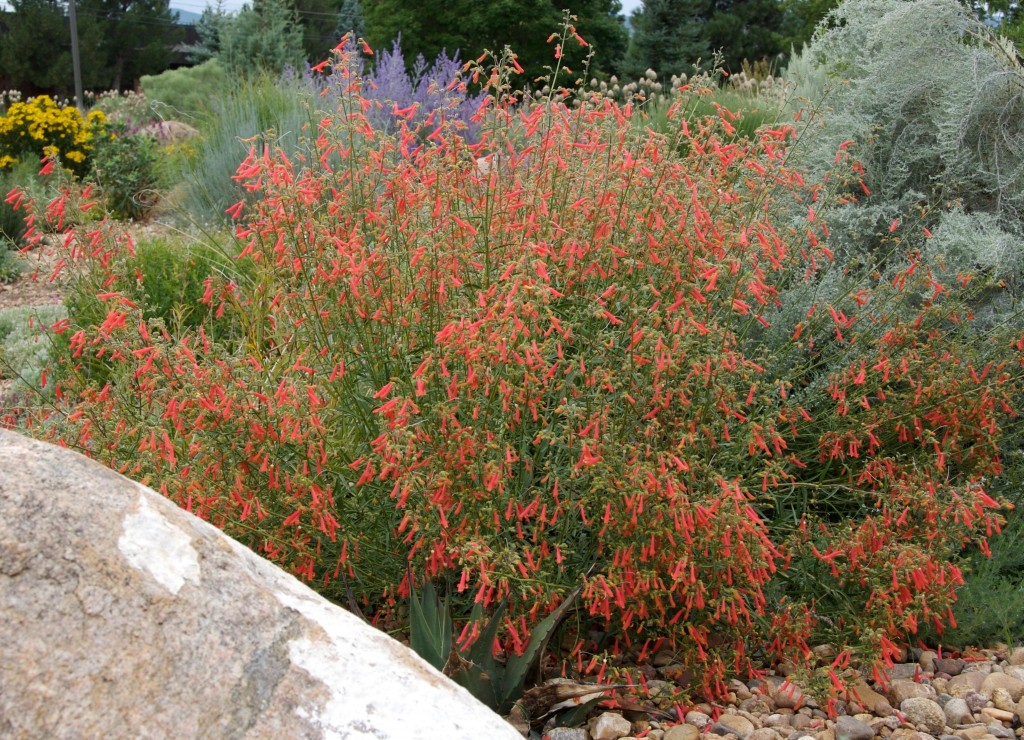 First time summer visitors to the Rockies are often struck by the abundance of scarlet tubular flowers everywhere you look in the high meadows. One often sees hummingbirds darting from scarlet gilia to penstemons in the summer months, always a highlight for the observant visitor. Many of these mountain plants adapt well to the Xeriscape or border in your home garden. Three scarlet penstemons span the summer season: the sharkshead penstemon (Penstemon barbatus) often starts blooming in late May, and tubular Eaton’s penstemon (Penstemon eatonii) carries the show into July. But the longest bloomer, and longest lived of the scarlet penstemons may only start to bloom later that month. Bridges’ penstemon flowers throughout much of the American southwest from Colorado to California. It forms an attractive, somewhat shrubby mound of narrow green foliage with stems 2-3″ in height with a succession of brilliant orange-red flowers from late July all the way to October most years.

Naturalized in buffalo grass, or among native shrubs, we have had Bridges’ penstemon living for nearly 20 years at Denver Botanic Gardens, making this by far the longest lived penstemon. It will grow in a wide range of soils and sites, although it needs at least a half days sun to bloom spectacularly. This is one penstemon you are sure to have visited by hummingbirds on their way south in the late summer. Plant some Sunset hyssop nearby, and they may linger in your garden for days at a time!

Thanks to Harriett McMillan, Echter’s Greenhouse & Garden Center, for writing this piece.